BIRDS of THE WORLD - An Online Bird Book


Many of the broadbills are brightly colored birds that present broad heads, large eyes and a hooked, flat and broad beak. They range from 13 to 28 centimetres in length, and live in the dense canopies of wet forests, allowing them to hide despite their brightly coloured plumage. The broadbills are for the most part insectivorous and carnivorous. Prey taken include insects, spiders, centipedes and millipedes, as well as lizards and tree frogs. Prey is obtained by sallying from a perch to snatch it in flight, and gleaning the prey off leaves and branches while flying. Some species may take some fruit.

The asities are a family of small suboscine passerine birds. The family consists of four species in two genera endemic to Madagascar. They were thought to have been related to the pittas, hence the scientific name of the family. They are now consider to be more closely related to the broadbills and the Broad-billed Sapayoa of South America.

This family has just one species. Its nearest relatives are unknown, perhaps the broadbills. 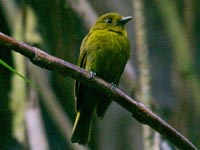 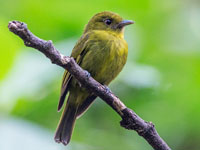