BIRDS of THE WORLD - An Online Bird Book

The accentors are all in a single genus Prunella. All but the Dunnock and the Japanese Accentor are inhabitants of the mountainous regions of Europe and Asia; these two also occur in lowland areas. This genus is not strongly migratory, but they will leave the coldest parts of their range in winter, and make altitudinal movements. These are small, fairly drab species superficially similar, but unrelated to, sparrows; they are generally regarded as being related to the thrushes or the warblers. They are 14 to 18 centimetres in length, and weigh between 25 and 35 grams. Accentors have thin sharp bills, reflecting their diet of ground-dwelling insects in summer, augmented with seeds and berries in winter. They may also swallow grit and sand to help their stomach break up these seeds.

Accentors spend the majority of their time in the undergrowth and even when flushed, stay low to the ground until reaching cover. Accentors may have two to three broods a year. Courtship consists of a great deal of song from the males, which may include short lark-like song flights to attract a mate. In most species, the male and female share in the nest making. They build neat cup nests and lay about 4 unspotted green or blue eggs. 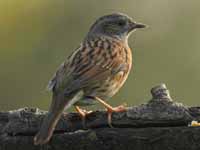 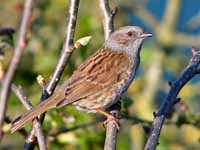 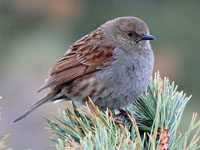 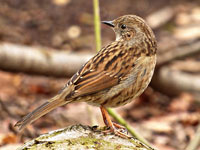 
The dippers are all in a single genus Cinclus. They are named for the dipping or bobbing motion. They are the only passerines that regularly swim underwater. They like to swim in moving water, particularly in streams. As with other birds that spend large amounts of time underwater, they have more red blood cells to aid in oxygen storage. All are stocky, with short wings and tails.